Worldwide there are an estimated 4 million people living with Parkinson's disease. Here in the US, approximately 50,000 people are newly diagnosed with Parkinson's disease each year. First described by Dr. James Parkinson in 1817 as the "shaking palsy", Parkinson's has likely been around much longer. Syndromes similar to Parkinson's were described nearly 2500 years ago in foundational Chinese Medicine texts such as the Huangdi Neijing and even further back in Indian/Ayurvedic medical texts.

The disease can affect anyone with rates just slightly higher for men than women and slightly higher in whites than in African Americans or Asians. Parkinson's can take an unpredictable course with some patients being severely disabled or even deceased within 5 years of diagnosis, and others living their normal lifespan with only minor symptoms.

What Is Parkinsons From A Western Medical Perspective?

From a western medicine perspective, Parkinson's Disease is one of a group of motor system disorders that are caused by the loss of dopamine producing brain cells. As there is no definitive test for Parkinson's and there are many conditions with similar symptoms, diagnosis can be difficult particularly in the early stages. The general symptoms are as follows:

Tremor - often beginning in a hand, but does not happen in every case.

Slowed Motion (bradykinesia) - may worse over time but makes voluntary movements such as walking difficult, in some cases to the point where you cannot move without tremendous effort.

Loss of Automatic Movements - such as swinging your arms while you walk. Also a characteristic sign of Parkinson's is a "frozen" facial feature many times with unblinking eyes.

What Western Treatments Are Available? 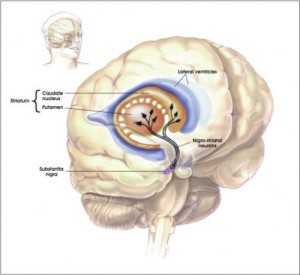 Western treatment focuses on medication, surgery, and/or physical therapy. On the medication side Levodopa, a natural substance, is used to boost dopamine levels in the brain. While effective initially, the effects can weaken over time and for some the side effects are too strong to warrant use. Many other medications work either in conjunction with Levodopa or have similar goals of controlling dopamine levels.

Surgical treatment of Parkinson's involves implanting a pacemaker type device deep into the brain areas that control motor movements. This, however, is usually reserved for advanced cases where medication is not effectively controlling the symptoms.

About Chinese Medicine and Acupuncture Research

Acupuncture is used around the world as a complementary treatment for Parkinson's. Due to the ability of acupuncture to work on a broad range of body systems, it has a valid role in the treatment and maintenance of Parkinson's. Research has shown that acupuncture provides symptomatic improvement in many cases and some studies have shown that it could be effective in greatly slowing the progression of the disease if treatment is offered early enough in the disease course.

As reported in my June 30 (2009) Research Synopses, acupuncture was found to create significant effects in motor function even when using distal points (points away from the scalp, in this case). This study shows how acupuncture can create and foster deep connections within the body and brain.

A south korean study performed on rats published in the Journal Proteomics (2008 Nov;8(22):4822-32.) found that acupuncture could stave off the decrease in dopamine levels possibly by reducing inflammation systemically. This would be extremely helpful in the early stages of the disease and certainly warrants further research.

Other studies looking at acupuncture have found similar benefits whether in animal or human subjects. The effects continue to be studied by researchers worldwide to better understand all of the mechanisms. Practitioners, myself included, in private clinics around the world have seen positive improvements in those with Parkinson's and see the value of treatment as early as possible in the disease course.

The Tam Healing System which involves tuina, acupuncture, and tong ren therapy offers good results with more complicated medical conditions including Parkinson's. There are many differences between this system and traditional acupuncture primarily in the criteria for point selection and secondarily in the methods of stimulation outside of just using acupuncture needles.

Our protocol for Parkinson's involves the following:

We generally begin each treatment with Tong Ren at the points listed below, then follow with strong tuina on the upper cervical huatuo areas listed as well as any Window of the Sky points. Afterwards we insert the needles, using the points listed below and others from a pure TCM perspective (for dampness, qi deficiency, etc.) as appropriate. After the needles have been retained for approximately 30 minutes we again do deep tuina work on the neck, spine, and any other problem areas to faciliate circulation.

Why Would This Work?

As the studies referenced above illustrate, we know that certain acupuncture points will create positive changes in motor function. Additionally we know that acupuncture reduces inflammation systemically and appears to be able to effect dopamine levels directly. This combination of internal functions and removing hindrances of the body to function well will go a long way towards limiting the symptoms of Parkinson's.

Our system is in some ways very simple. We work to facilitate the circulation of blood for healing and proper function of the brain, we remove hindrances of brain function by regulating the energy in certain areas (i.e. motor cortex, etc.), and we remove hindrances in neurological pathways from the brain to the rest of the body (opening of the spine and base of the skull). During this process acupuncture and associated techniques reduce inflammation, promote proper brain function and chemistry levels, and promote range of motion in effecting muscles and joints.

As practitioners, and valued participants in our site, we welcome your input on protocols that have worked well for you, testimonials that give hope to others with Parkinson's, etc. Please use our forum system to submit your experiences.   We will certainly all benefit from it.