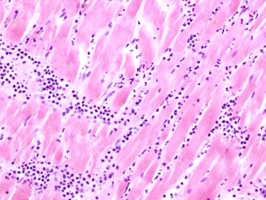 “No not that bloodletting” is a phrase I use within many articles that discuss this commonly used acupuncture technique.  The technique involves pricking an acupuncture point to draw out a few drops of blood.  A moderately detailed discussion can be found on our bloodletting section.  But suffice it to say the technique is very minimally invasive and for the most part comfortable - eliciting just a slightly stronger response than standard acupuncture needling, but nothing along the lines of a hypodermic needle blood draw.

Bloodletting is often done on what are the called the “Jing-well” acupuncture points.  Jing-well points are thought to clear heat and stagnation from the opposite end of their respective channel, among other usages.  In general terms it is a useful technique to use in patients whose conditions involve qi and/or blood stagnation in Chinese Medicine terms.

The study we are discussing today was exploring ways to mediate cardiac damage via hypoxia in people living in high-altitude environments.  While it is an animal study and not isolated to covid, I feel it is a a timely discussion and offers a substantive part of a potentially valid approach to limiting future cardiac issues in people who have/had Covid.

According to researchers from the Einstein Medical Center in Philadelphia:

“Patients with cardiovascular disease are more likely to be infected with SARS-CoV-2 and they are more likely to develop severe symptoms. Hypertension, arrhythmia, cardiomyopathy and coronary heart disease are amongst major cardiovascular disease comorbidities seen in severe cases of COVID-19. There is growing literature exploring cardiac involvement in SARS-CoV-2. Myocardial injury is one of the important pathogenic features of COVID-19.” (source)

In the study we are highlighting here, researchers from the Medical Institute of Qinghai University in Xining China used a rat model to explore the mechanisms through which the bloodletting of Jing-well points may help mediate myocardial injury in hypoxic environments.  In this study, rats were evenly divided into 5 groups, one of which was a sham acupuncture group.  The treatment group received bloodletting at the following 6 Jing-well points daily for seven days before a hypoxic challenge:

As illustrated by the descriptions, the points used generally have a strong influence on both consciousness and heat/stagnation (which is related to the concept of inflammation in western terms).  Previous studies with a similar approach found that this technique could “improve microcirculation disturbance, increase microcirculation perfusion, alleviate secondary brain edema and promote the recovery of nerve function - in mice - with TBI” (source).

After the mice were exposed to hypoxic conditions, blood and tissue samples were taken to explore the effects of the pre-treatment via Jing-well bloodletting as compared to the various control groups.  Without delving too deeply into all of the biochemical details, the researchers found a strongly protective response from pre-treatment with the Jing-well points.  They note that the mechanism may involve increasing “HIF-1α/BNIP3 signaling-mediated autophagy and decreasing oxidative stress”.  In layperson terms this means that the technique limited the damaging effects of the low oxygen environment by limiting tissue death and inflammation.

So for the many people who experience cardiac issues after high-altitude exposures, this alone may be useful information and possibly a valid technique for practitioners to consider post-exposure as well in those cases.  With relationship to covid, this would obviously need to be explored in future studies, but generally based on this and other related studies it seems warranted to consider Jing-well bloodletting in the early stages of covid symptoms/diagnosis.  Possibly even more so in those with pre-existing cardiac issues.

Further, while I am admittedly stretching the implications of this particular study, considering the known influences of Jing-well bloodletting on brain tissue damage from stroke, etc. in conjunction with the findings here it may well be warranted to explore this as a pre-treatment, or even treatment, for those experiencing what we now term “long covid”.  Anything that could help limit (or even restore) the microcirculation and inflammatory damages that appear to be behind some of the longer term covid issues seems worthy of exploration.  Particularly with such an easy to administer and low cost intervention.