Autism is a complicated medical condition with a range of symptoms that has no firmly established causal factors. The condition itself has been steadily rising in prevalance and as of a 2002 CDC study is thought to effect 1 in 150 children. Parents, researchers, government officials have all been involved in the debate as researchers explore medical causes such as various vaccines, environmental causes such as pollution, food additives, and societal factors such as bad parenting have even come up. Recent research in the area has been looking at the role of inflammation in the brain and the removal of such inflammation has shown some evidence of improving function in autistic children. This article will explore autism generally, discuss these treatments, and how they might be tied to treatments we have been performing with acupuncture, tuina, and energywork within the Tam Healing System.

What Are The Signs of Autism?

According to the Diagnostic and Statistical Manual of Mental Disorders autistic children will display some or all of the following symptoms.

Communication Skills:
-- Delay in, or total lack of, development of spoken language
-- Difficulty initiating conversation
-- Echolalia (repeating words or phrases instead of using normal language)
-- Doesn’t respond to name
-- Doesn’t use or respond to gestures and other nonverbal cues 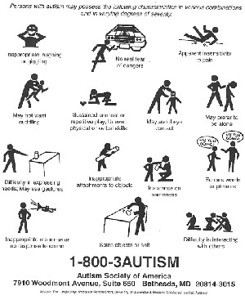 You may see many of these signs among the general population to varying degrees which is part of the difficulty in diagnosing autism. If a diagnosis is made it will often be around the age of 3 or later for more mild cases. Treatment often involves parental counseling to help them understand and work with their child, special education specialists, and psychologists. If there is pharmaceutical intervention it is often for other conditions such as seizures, hyperactivity, etc.

As with any condition of this nature people and researchers are looking down every avenue for help and clues and there is a dizzying array of "alternative" treatments offered from a range of nutritional therapies (supplements), dietary changes (vegan, etc.), antibiotic therapies, antifungal therapies, the list goes on an on. Recent work in hyperbaric oxygen therapy appears to offer some promise and is worth exploration. 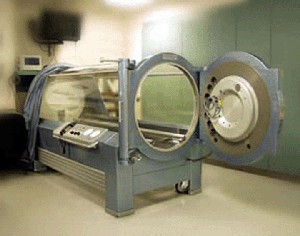 The reasoning for using oxygen therapy lies within speculation of auto-immune activity and/or viral involvement in the development of these conditions. This activity can cause inflammation of the brain (encephalitis), and this inflammation can lead to disruptions in development, behavior, and cognitive functioning. Hyperbaric oxygen therapy greatly increases the level of oxygen in the tissues allowing for the healing of these tissues and to instill the ability for the brain to develop and function properly.

You can read the study via the links below but the findings were significant. Of the 62 participants 80% of those in the treatment group showed improvement in overall functioning, receptive language, social interaction, and other markers, compared with 38% of those within the control group. 30% of those in the treatment group were rated by physicians as "very much improved" or "much improved" compared with 8% in the control group. All things considered a significant step forward.

In our clinic, my teachers centers, and within clinics of colleagues who use our acupuncture and healing system we see a fair number of autistic children as well as those with a range of developmental disorders. The system we utilize was developed by Tom Tam a healer and acupuncturist based in Boston, Massachusetts. The "Tam Healing" system is a combination of old TCM theories such as the huatuo-jiaji and sky window systems and the use of points based more on clinical experience and western medical verification than on TCM theory per se. The points we use are generally the same regardless of the modality (acupuncture, tuina, or energywork - tong ren therapy). [Sidenote - For those who are yet unaware of Tong Ren Therapy - it is a form of energy healing related in ways to medical qi gong, reiki and other forms but ultimately quite unique.] In short, needling has shown effects on inflammation and circulation, tuina removes structural obstacles to proper circulation and functioning, and energy healing is essentially unlimited but shown to have similar effects as needling on inflammation, circulation, and nervous system activity. Tong Ren Therapy or other forms of energywork are often the only option for many conditions in young children, particularly within autistic patients, as some will not tolerate needling.

As mentioned, one important aspect of our system is the use of the Window of the Sky points. We use these points in a variety of conditions but primarily to improve the level of circulation to and from the brain. Knowing our treatment for autism this study was interesting as the focal point of our treatment for autism is to improve the circulation to and from the brain and to use certain scalp points to improve the function in those areas. In effect reducing inflammation and increasing the circulation and healing potential of the body.

From an acupuncture perspective we know that needling appears to have local and systemic effects in reducing inflammation and will increase the microcirculation in and around the areas that are being needled. With proper treatment it would be reasonable to assume that we can create a similar effect to oxygen therapy while offering other benefits of acupuncture such as changes in neurological functioning, systemic relaxation and circulation and more. And perhaps the two together would create an even greater change.

Our general protocol and reasoning for the treatment of autism is as follows:

Without going into too much detail about our techniques (which are covered elsewhere) we encourage others to explore our treatment points and the treatment ideas from our system and from current western medical research. We hope that through mutual exploration we can continually develop more effective treatments for a range of complicated conditions such as autism. It is always worth exploring commonalities between observed and hypothesized effects of acupuncture and modern medical understandings.