Doing Nothing for the New Year - The Art of Wu Wei

Doing Nothing for the New Year - The Art of Wu Wei

Why is my New Year's article being penciled in during the middle of the month instead of greeting you bright and early on the morning of January 1st, 2010? Why have I let my beard grow out? The answer to these and other questions is that I am practicing the art of Wu Wei - a new years resolution of sorts... And I am writing this to invite you to do the same. Minus the beard of course, which is really just because it's been bitterly cold here in the South....

The term "Wu Wei" is a central theme of Taoist thought and provides the principle meaning behind writings such as Lao Tzu's famed Dao De Jing (translations vol1, vol2) and many other Chinese writings from classical times. Within the Dao De Jing you read passages such as:

Keep filling, and overflow.
Why not stop filling
and practice moderation?
Wrought the blade too sharply,
the edge will not last. 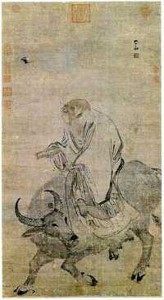 How often do we feel we may have over sharpened our blades, or overfilled our stomachs? Quite often indeed - particularly right after Christmas! Loosely translated the art of Wu Wei is simply the art of "doing nothing." The concept, however, is not nihilistic in any way, like a burnt out roamer that doesn't care about his/herself, the world, or others. The character "Wei" means doing or action and "Wu" means naturally without preconceptions, perhaps similar to our western idea of "going with the flow." You will see Wu translated as "nothing" at times but it is the spirit of flowing that is important for the proper understanding of Wu Wei. Like my extremely busy and accomplished teacher Master Tam always says - "we're just sitting here doing nothing..."

For our western minds, doing nothing is a seeming impossibility. Or at best poorly understood. The concept is really about going with the flow but that has connotations of passiveness for many. The critical part of this concept is that the "doing nothing" is not about being lazy or letting the world pass us by, it is about doing less, but well and naturally, without all of the mental baggage we distract ourselves with.

The art of Wu Wei, being a universal concept, is well presented in the Bible. Take Matthew 6:25-27 for instance:

Look at the birds of the air; they do not sow or reap or store away in barns, and yet your heavenly Father feeds them. Are you not much more valuable than they?

Who of you by worrying can add a single hour to his life?"

Does this mean we shouldn't keep bread in our homes or clothes on our back - No. People need food and clothes and it is good to be prepared and protected from the elements - it means not to be consumed by anything beyond your basic necessities, to be clear that worrying about our lives does not resolve anything at all.

The Art of Doing Less

For the new year so many people talk about all of the things they are going to "do." Eating better, taking better care of themselves, exercising, etc. They rarely, however, talk about doing less. In modern western societies particularly, less is better, healthier and more fulfilling. Unfortunately for us "less" is the antithesis in many ways to our modern consumer oriented society. Instead, we fill our days and minds with tasks, thoughts, and foods that drive our emotions and energy up and down constantly. As a result of this up and down, we see a rise in conditions such as anxiety and depression. Even the younger members of our society, who should be the poster children of Wu Wei, are experiencing these same health issues. These conditions come not from lack, but from excess - including excessive thought and emotion.

In Donald Miller's latest book, "A Million Miles in a Thousand Years" (picture with amazon link)" he discusses this theme well from a personal and Christian perspective, but also brings up an interesting research conclusion about happiness. Drawn from a variety of indexes and studies, Denmark comes out as the place with the happiest of inhabitants. What distinguishes the danes, Miller says, is that they have very low expectations. In other words, they live closer to the state of Wu Wei. They even have a word for it, "Hygge", which loosely translated means the art of being "cozy."  This "coziness" is derived from taking time to sip your coffee, to talk to your friends, to sit under a tree and watch the clouds for a few minutes. By not reaching and grabbing and expecting constantly we live more peacefully, Master Tam's "sitting here doing nothing..."

So many want to take more vitamins, or eat more vegetables, or run an extra mile, etc., etc. None of this is the answer, or really even all that helpful. In reality, skipping one meal a week would do more for weight loss and humility for that matter than 80% of the products on the market. Dietary Wu Wei is described in my previous commonsense diet article - eat when you are hungry and drink when you are thirsty - not out of habit, because it is time, or because your emotions have driven you to it.

In an insightful exploration of the modern world's concentrations of centenarians, the Blue Zones by Dan Buettner, looks at the diets and lifestyles of people that live the longest. Instead of finding a miracle berry or some kind of other fast track to health, they found Wu Wei. The people that lived the longest were generally happy with their lot, were engaged with their families and communities, were generally active, and ate real food in moderation. That's it... there was nothing else amazing about their stories.

The Art of Accomplishing More

So doing less we understand, but how do we accomplish more? Wu Wei can also be conceptualized as the art of doing nothing but accomplishing everything. This is important as Wu Wei is not about just sitting back and letting the world go by. This aspect involves a certain clarity of mind but also practical, natural knowledge. If you were to start a garden, for example, would you plant your cucumber seeds in the middle of winter, and then get upset when they do not sprout out and proliferate giving you an abundance of the lovely vegetable? No, of course not. Yet our days are filled with either tasks that don't "need" to be done or they are done without any kind of focus. In other words finding us doing more and accomplishing less, rather than the other way around. For better or worse we live in a world where multi-tasking is a seeming requirement yet nothing all that remarkable (except perhaps for a rise in anxiety disorders and a bad economy) has happened. Really, how significantly has the world changed in the parts that matter to us as humans? Are we happier? Living longer? Do we have more peace? No, not really. So while trends show people feel they have "less time" and are "busier than ever", what is it that is consuming us?

What needs to be regained is our clarity. This comes from single-tasking and from reducing our need to create a story. When we need to mail a package, for example, we should simply put the items in the box, seal it, go to the post office, they weigh it, we pay, and off it goes. Instead we think about going to the post office, we do ten other things, we mentally complain the post office is too far, we ship the package and worry about it getting there even though your personal experience has never involved a loss of a mailing and on and on. This is just a simple task, but the amount of energy and distractions surrounding these tasks in our lives has us doing more and accomplishing less. Clarity, focus, and action are all a part of Wu Wei. Just do, don't think, and afterwards don't dwell.

The Art of Naturalness

The final concept inherent within "Wu Wei" is the aspect of naturalness. I feel that out of all the connections we have lost or threatened in our race towards "modernization" the crucial one is our connection with our natural environment. Eating in season, working in season, living with the seasons. The world doesn't cater to us - it does it's own thing - it "is" Wu Wei. By not following this we go at odds with the world and create disease. The world is much larger than us and just like water will find a way to flow anywhere, we can makes our own lives easier by working within the constructs of being human on the earth. This instead of living the idea that we are supreme and invincible. When it is warm wear a t-shirt and eat an apple, when it is cold put on a jacket and eat soup... Respecting the seasons and our world will lead to better health long before anything we "do" does...

If you are busy, just be busy. Don't worry about how busy you are, or make a big story about how busy you are or add to your busy-ness by thinking about a million other things. Just be busy, do your work, and then enjoy your life... Wu Wei. Like a lazy dog that only moves to eat and then lays back down again - in that one action he has accomplished all he needed. He didn't walk around all day worried about whether or not he will get fed and didn't spend anytime at all after eating thinking about how he should have eaten this, or how he ate too fast, or anything at all.

By examining what it is we are trying to do from day to day, where our time goes, how much of a story we are creating, we can move ever deeper into the state of Wu Wei. The peace and freedom and space that this allows us contributes to our health, our clarity, our connections, and our ability to further exist in that state. Doing nothing while accomplishing everything... Wu Wei