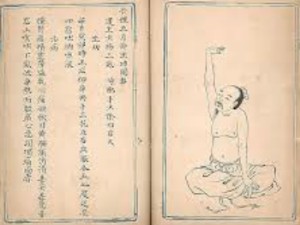 The internal arts of qigong, tai chi, and meditation, among others, have been shown through numerous studies to offer the practitioner a range of health benefits. The majority of these benefits are related to cutting stress hormones and the destructive processes (i.e. inflammation) that coincide with sustained stress (1 ). But there are also benefits with regards to balance and coordination (falls being a significant contributor to deaths) along with cardiovascular improvements.

There are many forms of qi gong. Many of these are easier to learn and take less training and physical space than many of the forms of tai chi for example. One of the quite popular and widely taught forms is known as ba duan jin (or the “eight brocades”). In our weekly qi gong class and live broadcast we very often perform this form (watch an example here).

In a recent study researchers from the Kunshan Hospital of Traditional Chinese Medicine recruited 90 patients with colorectal cancer that were also undergoing chemotherapy and experiencing cancer related fatigue. The patients were divided into a ba duan jin qi gong exercise group and a standard care control group and then followed over 24 weeks.

Within the qi gong group they were asked to perform 20-40 minute sessions at least 5 days/week and when at home they were also encouraged to have family members practice with them as well.

As the name indicates the eight brocades consists of eight movements which can be repeated multiple times each to make the session shorter or longer. You can do the form in around 12 minutes or do more repetitions of each move and extend it as long as you would like.

The researchers found little difference between the control and the qigong exercise group at week 12, but at 24 weeks there was a considerable improvement in the qi gong group compared with the control. To evaluate they utilized the brief fatigue inventory (BFI) as well as the Kamofsky performance status (KPS) and the Pittsburgh sleep quality index (PSQI). They concluded that “Baduanjin qigong exercise can relieve CRF [cancer related fatigue] in patients with colorectal cancer undergoing chemotherapy and can improve their physical activity level and their quality of sleep”.

For something that is relatively easy to learn, takes little space, and can be done (if slightly modified) by anyone in nearly any physical condition, these are very welcomed improvements. There are many, many forms of qi gong so if this form is not appealing for whatever reason, most others would be very likely to carry similar health benefits.