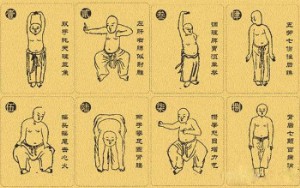 Qi Gong (also "qigong", "chi gong") is a name for any number of health exercise routines from the eastern traditions. There are literally hundreds of forms, some are entirely static in that you are functionally doing standing meditation along with some basic arm movements, some are quite dynamic more closely resembling Tai Chi (the better known cousin of qi gong). In our clinic we generally utilize qi gong as warmups for our tai chi classes, which isn't to diminish in any way their value (quite the contrary in fact). For most of the common forms they are much easier to learn, take less space, and generally carry very similar health benefits to Tai Chi.

One of the more popular forms of qi gong is known as the Ba Duan Jin, or the "eight brocades". It is also known as the "eight silk weaving", "eight section brocade" among other names. The practice dates back to the Song Dynasty (960-1279 AD) with a version of it being first mentioned in the "The Pivot of the Way" (Dao Shi, c. 1150) and many other adaptations around that time and then certainly through the years.

Below is a video of a slightly adapted version that we regularly do in our weekly qi gong and tai chi class (the qi gong section is broadcast live most Tuesday evenings).

I think in the west we are guided to think that exercise needs to be a grueling enterprise for it to have value to our health. For many people, even younger folks, exercises such as jogging, cycling, weight lifting, etc. are just not where their interests and/or physical capabilities are comfortable and some have physical limitations that make those styles of exercise more difficult.

All is not lost, however, if standard western exercises are not within your comfort level. There are literally volumes of research supporting the health benefits of Tai Chi and Qi Gong and I have written about these many times on this very blog. I think one aspect which surprises people is that these far more gentle exercises also build cardiovascular strength, muscle strength and coordination in ways often on par or even superior to more common western exercises such as jogging. What people do seem to intrinsically understand, as they seem closer to moving meditation, is how they would offer benefits to stress hormones, mental awareness and impulse control, and overall wellbeing.

Today I'm writing about a study performed with college students and researchers at the Fujian University of Traditional Chinese Medicine that compared the eight brocades qi gong routine to their regular workouts and used a variety of measurements to determine the benefits of these styles of exercise. The researchers started with the concern, which is a global concern, that "the physical and mental health of college students tends to continuously decline around the world, therefore, it is important to improve their health during college period". Realistically this type of body-mind exercise and awareness developing techniques should start much younger than college age, in my opinion, but that is a topic for another time.

For this study the researchers evenly divided 222 college students into a eight brocades qi gong exercise group and a group where they simply maintained their current levels of exercise. The qi gong was practiced 1 hour per day, 5 days per week, for 12 weeks. The researchers looked at a range of inputs including lumbar muscle strength, lower limb proprioception function, cardiovascular fitness, quality of life measures regarding sleep, stress, mood and more. Measurements were taken at baseline, at the end of the 12 week intervention, and then again at 25 weeks.

The researchers found significant improvements in the qigong exercise group versus the standard exercise group. These were most notable physically in lower limb proprioception function, cardiorespiratory endurance, flexibility, and the explosive force of the lower limb (jumping) and mentally in attention/impulse control. Between the qigong group and the regular exercise group there were no significant differences in blood pressure, stress, quality of life, sleep and the other measures. Functionally with less wear and tear on the body and improvements in many other significant measures (ones that you might not tie to qi gong) the eight brocades was essentially standard exercise plus.

The researchers concluded that "baduanjin exercise had an advantage for college students on improvement of lower limb proprioception, enhance of cardiorespiratory endurance, flexibility, explosive force of lower limb and attention, compared with usual exercise".

Nearly anyone can perform these exercises with fairly minimal training (there are even seated versions). They are safe regardless of physical, cardiovascular, or mental conditioning, whereas other more aggressive forms of western exercise may simply not be possible. With some training, however, and a better understanding of the dynamics of these forms you start to get even deeper benefits on par with seated meditation (which has been studied extensively) and the strength that develops on a physical level begins to aid ones ability to perform other exercises and daily tasks. All in all, it is a fairly simple way to get started on an exercise program and through the simplicity is a profound array of benefits that truly make this style of exercise first rate.