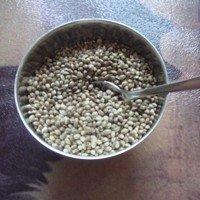 Chinese Medicine provides for a broad range of potential applications within the realm of cancer, both in conjunction with western approaches or entirely on its own.  In cases, Chinese Medicine can be a good balancing point to western medicine, so to speak, as on average it is well tolerated and doesn’t add to the load of the person in the way that stacking medication on top of medication may do in a pure western approach.

One of the more common issues experienced by people with advanced cancer is constipation.  Rates of constipation in that population range from 40-90%, with the higher end linked with age and the extent of opiate use (source).  Besides being uncomfortable, constipation, may lead to other digestive issues, obstructions, hemorrhoids, poor assimilation of nutrients, etc.  All of these associated issues provide further strains on a person that is already struggling.  Overall constipation may lead to poorer outcomes as well as broader strains and expenses on the healthcare system (source).

In the study I’m exploring today, researchers from the Hong Kong Baptist University, among other institutions, recruited 60 patients with advanced cancer and experiencing constipation and randomized them into a Chinese herbal treatment group and a control.

The formula that was used within the study is Ma Zi Ren Wan, or the “hemp seed formula”.  In Chinese Medicine diagnostic terms, it is a commonly used formula within the “moisten the intestines and unblock the bowels” category which also contains the formula Run Chang Wan or the “lubricate the intestines pills”.

As the formula name implies, among other ingredients, it contains Huo Ma Ren or “hemp seeds” which are used to moisten and nourish the intestines, mildly tonify the yin (the fluid/cooling aspects of the body), and promote the healing of sores (with both topical or oral applications).

The participants in the study ranged from 47 to 95 years of age and treatment was slightly tailored to each individual in the treatment group, both in adjunctive herbs added to the formula and dosage adjustments - ie more akin to how it would be applied in a true clinical setting.  Treatment for the study was offered twice/day after meals for 2 weeks.  They were evaluated by a general assessment on a 0-6 scale; 0 being worse, 3 being about the same, 6 being markedly better.  Researchers also noted stool frequency, stool form and related symptoms such as bloating and nausea, among others.

Considering all factors, the researchers found that 59.3% of those those in the Ma Zi Ren Wan treatment group noted improvement in their symptoms, compared with 28.6% in the control group.  The researchers concluded that Ma Zi Ren Wan is “well-tolerated and effective for relief of constipation in patients with advanced cancer”.

The study itself was well carried out, properly tailored without losing the rigors of the scientific method and showed an effective outcome on a difficult issue.  Many cancer patients and oncologists (at least in the US) are often concerned with mixing western and eastern treatments for fear of overlap or confusing arrays of symptoms that lead to mis-diagnosis or inappropriate interventions.  On average, while this needs to be considered, herbal formulas often have a very minimal array (if any) of side effects and the vast majority are entirely self-limiting.  The formulas clear the body relatively quickly (as they are essentially food for all intents and purposes) and often have broader beneficial effects than symptomatically directed Western medicines.

Comparing the broader array of potential benefits, the lack of systemic disruptions and, what this study has shown, the overall effectiveness of Ma Zi Ren Wan to harsher western alternatives (i.e. laxatives), the benefits seem quite clear.  Further, there are financial benefits with herbal medicines generally being a fraction of the cost compared with their western counterparts.  All things considered, this study offers yet another example of proper east/west integration of approaches leading to more beneficial and reliable outcomes.