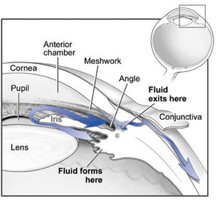 Just under 2 percent of the US population over 40 is likely to develop glaucoma, and the condition is a leading cause of irreversible blindness world-wide. From a western medical perspective there are a number of contributing factors such as: hypertension, diabetes and use of steroids, among others. In essence the majority of the factors are lifestyle and stress related that ideally would be properly dealt with long before the development of glaucoma comes about.

The study I am going to discuss today was conducted by researchers at the All India Institute of Medical Sciences with other contributors from New York University and the Otto-von-Guericke University of Magdeburg. The team recruited 90 patients with primary open angle glaucoma and divided them into a wait list control group and a mindfulness meditation group. The intervention was offered over 21 days, with the meditators practicing daily.

Now their primary reason for doing the study was that current western medical treatments often involve more management than resolution. Part of this is that the interventions don't really focus on the contributing causal factors such as diabetes, hypertension, overuse of steroids, etc. In essence, most of these causal factors are derived from lifestyle and dietary habits that increase stress hormones, increase inflammatory markers, disrupt vascular circulation and ultimately create damage - with glaucoma being one of many possible issues that may develop.

From a Chinese Medicine perspective the "liver" is the system that is mangled by these poor lifestyle/dietary/emotional habits and as this system also affects the eyes it is often involved with glaucoma (for general information on what is meant by the "liver" in Chinese Medicine we suggest you read "My Liver is What?" and "Treating the Cause vs. the Symptoms"). Our glaucoma treatment section has some of the likely underlying diagnostic patterns for glaucoma. In most cases you have what we call the "liver" and the "yin" involved. The liver system is a composite of our stress hormones, certain metabolic functions, and the smooth control of emotions. What we call "liver qi stagnation", for example, is in loose terms what we call "stress" in the west.

How this affects our eyes is simple in some regards. If you've ever watched someones face get red when they are angry - that is liver qi stagnation, or what we might call liver yang rising. The person experiencing this anger might also belch or have reflux and with sustained anger, their blood pressure goes up, their stress hormones such as cortisol release, their head might hurt (or might hurt after the event has passed). This combination of things happening on a physiological level is what is implied by the terms we use in Chinese Medicine from the liver function. The real danger is when these are sustained over long periods of time.

In Chinese Medicine another concept, the "yin", is functionally part of the fluid and down-regulating functions of the body. So when a force is too strong, too high, too hot, etc. - some functions (the "yin") are put in place to slow, lower, or cool these actions to regulate the body. When the initial force is too strong, or the downregulating force has to work too hard for too long and it weakens, then the body runs unregulated with destructive forces. In western terms this is the inflammatory markers, stress hormones, etc. By looking at the composite of the person we can see not just the causal factors but also where they are likely to show up in the person, ideally, again, before the symptoms actually develop.

Now back to the study, the researchers used a combination of measures such as intraocular pressure, quality of life scales, and a variety of stress and inflammatory markers such as cortisol, IL6, and TNF-α, among others. They found significant improvements in the meditation group compared to the waitlist group. Intraocular pressure dropped 5 points, cortisol was 100 points or so down, inflammatory markers were all down and their quality of life scores were up. The researchers concluded that meditation can be "recommended as adjunctive therapy for primary open angle glaucoma".

Combined with Chinese Medicine (acupuncture and possibly herbal medicine) the patient is very likely based on clinical experience and research studies to do well. The significant benefits will be had from someone sitting with the patient and addressing their issues broadly, not just treating the end result "glaucoma". And as the patient better understands these relationships, the entire process will be aided by adding in a well known andidote to stress and inflammatory markers - meditation (study). For those ready to begin now, you can read "simple meditation technqiues" - our very basic beginners guide to meditation.