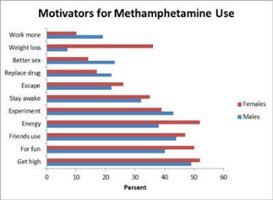 Roughly 1.2 million people in the US have used methamphetamine in the last year. It is the second most commonly used drug in the world with roughly .4% of the worlds population having used it. It is an extremely complex health epidemic with strong dependency issues, cognitive impairments, a range of physical health affects infectious, cardiovascular and otherwise and, unfortunately, death.

Methamphetamine, while being the focus of the study we are discussing today, is only one of many strong substances that are destroying the lives of people around the world. The global addiction epidemic is a problem that crosses oceans, socioeconomic boundaries, ages and cultural backgrounds. Many people, upwards of roughly 80% in the US at least, start this destructive path by regularly prescribed pain medications. Reducing prescriptions, while a great idea for those not yet on that path, is not as easy for those who still have the same underlying issues that the pain medications did not resolve in many cases and now have a physical dependency on top of that.

There is a role for Chinese Medicine within this epidemic as it has been shown to be useful not just for a range of pain conditions (often the on ramp to the prescription drugs that lead to further problems), but for a range of psychological issues and physical addictions that continue this epidemic.

While the research I'll be exploring today is about meth specifically, an article in forbes, "The Role Of Acupuncture In The Midst Of The Opioid Crisis" is a worthwhile read to explore the situation further. Further connections can be followed by keeping up with the "National Acupuncture Detoxification Website" (promoters of the NADA auricular acupuncture protocol).

Publishing in neuroscience letters a team comprised of researchers from China and Korea including those from the Daegu Haany University College of Korean Medicine conducted a study utilizing a single acupuncture point looking at its role in suppressing IV methamphetamine usage.

Utilizing a rat model with manual acupuncture at HT 7 and a control group utilizing LI 5 researchers were looking for whether or not acupuncture was helpful in reducing the self administration of meth and by using certain brain chemical antagonists how it was performing this function.

Now ultimately, as with most studies of this nature, it is unlikely that simple acupuncture at a single acupuncture point will be systemic enough to curve the entire opiate epidemic. Properly tailored acupuncture treatments will likely yield the most consistent results. But for those around the world with very limited (or no) access to health care (Western or Chinese) if this were to help with even 20% of the people worldwide the adoption of these methods would be important to say the least.