"ChadD" is an acupuncturist and lives in Minneapolis and has authored 363 other posts. 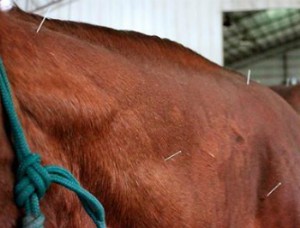 While many people are still wrapping their heads around the idea of receiving acupuncture treatments for themselves, acupuncture has broad applications in animals as well. Acupuncture is used fairly widely in cats, dogs, horses and many other animals. Equine acupuncture, related to the study discussed below, is fairly widespread and horses respond well to acupuncture for a broad range of conditions. It is a recognized treatment by both the American Veterinary Medical Association and the American Association of Equine Practitioners.

While I am going to discuss a fairly small scale equine acupuncture study within this article, the overarching point is that working on animals seems to further dilute the idea that many Chinese Medicine skeptics have; that acupuncture is merely a placebo. While it cannot be conclusively shown that animals, particular those as emotionally and intellectually developed as horses, can not be "manipulated" by a placebo/conditioning effect, it is less likely by far than in humans (if it exists at all). Thus any effect with proper measurements that can be repeated in animals can likely be considered a true clinical response under most study conditions.

In the study that I will be discussing today, researchers from the College of Veterinary Medicine within the Western University of Health Sciences in Pomona California conducted a fairly simple study looking at the effects of multiple vs. single acupuncture treatments. In particular they were exploring the clinical effects of multiple treatments on laminitis in horses.

Laminitis is a very common, painful condition that can make it very difficult for horses to stand and walk. In advanced cases it can involve the horse not being able to stand up at all and leading to euthanasia. While somewhat irrelevant for the purposes of this article there are some known causes, particularly overfeeding, but also other inflammatory factors. I mention this in part because there are numerous animal and human studies showing positive reducing effect on inflammation via acupuncture.

In the study the researchers recruited 14 horses with chronic laminitis. It is generally understood that acupuncture is helpful for this condition, but the number of treatments and frequency is difficult to know in scientific terms, much as it is for humans. This is due to the complexity of treatment protocols, practitioner skill levels, and, of course, the physiology of the patient.

The researchers found that subsequent acupuncture treatments "will result in increasing levels of pain relief" and this shows that there is "an advantage of performing more than one treatment".

Certainly in humans with chronic pain/chronic inflammatory issues we see a cumulative effect of acupuncture across time and then at some point the effect often sustains for quite some time without the need for further treatments. Personally I have many patients that had suffered for decades with chronic issues who after a series of 4-15 treatments spaced out weekly or less go years and years without the need for treatment of any kind. While most patients would be very happy with simple pain relief that doesn't involve medications, even if they had to do acupuncture on a regular basis (and some do), the goal of the treatment is a more permanent resolution and this is accomplish-able in many patients.

"ChadD" has published 363 other posts