The Science Behind Lymphatic Massage

The Science Behind Lymphatic Massage 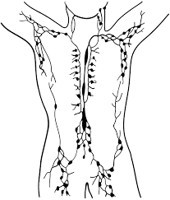 Manual lymphatic drainage (MLD) is a technique used in the prevention and treatment of both edema and lymphedema. It is estimated that worldwide, 1 in 30 people suffer from lymphedema, an incurable condition that requires constant care and attention in order to control symptoms. The disease is classified as primary, a congenital malformation of the lymphatic system, or secondary, as a result of surgery, radiation treatment, cancer, or infection. Primary lymphedema accounts for only 10% of total lymphedema cases, meaning the remaining 90% of cases are brought on by infection or trauma to the lymph vessels, the majority of which are from cancer treatments. Following any disruption to the lymphatic system, it is important to take preventative measures in order to decrease the chances of developing lymphedema. MLD is one of the best ways to improve the function of lymph vessels in order to prevent or treat lymphatic dysfunction. 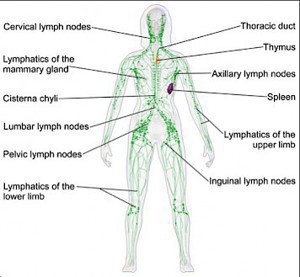 The purpose of the lymphatic system is to drain the body of substances that the circulatory system cannot reabsorb, which include: excess water, hematoma contents, cancer cells, bacteria, spores, dirt, allergens, etc. The lymphatic system is an open, one-way system with no central pump, unlike the circulatory system. Lymph fluid is moved throughout the body by contraction of the smooth muscle of lymph vessels (regulated by the autonomic nervous system) and by contraction of the surrounding skeletal muscles. The lymphatic system begins with the initial lymph capillaries that cover the body surface just beneath the skin and pick up the lymphatic load from the interstitial spaces. They surround blood capillaries and absorb the larger substances that can’t pass through the basal membranes of the venous capillaries.

The lymph fluid travels from the initial lymph capillaries to the lymph nodes via collectors. The collectors are located in the superficial fatty tissue and have muscular walls innervated by the sympathetic nervous system. Valves in the collectors ensure unidirectional flow of the lymphatic load. The area between adjacent valves is called a lymphangion; these are the contractile units. When t 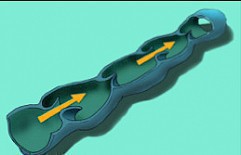 he lymphangion becomes filled with lymph fluid, its walls stretch, and reflexively contract to push the lymph forward to the next lymphangion. The angions normally contract 10-12 times/min, but can contract up to 60 times/min when necessary. When the lymphatic load exceeds the rate at which the lymph collectors can move the fluid out of the interstitial space, edema occurs. Edema can be treated by a combination of walking, exercise, elevation, and compression. MLD is helpful in post-traumatic or post-surgical edema and edema resulting from chronic venous insufficiency. If this dynamic insufficiency is not corrected and cause of edema is not addressed, damage to the lymphatic system can occur.

A mechanical insufficiency occurs when the lymphatic system is unable to function with a normal amount of lymphatic load. The demands of the lymph system have not increased, yet the system cannot function normally. This malfunction occurs as a result of surgery, radiation, infection, trauma, chronic venous insufficiency, or congenital malformation (primary lymphedema). As a result, there is an accumulation of water and protein in the interstitial spaces. Proteins are hydrophilic molecules, meaning they attract water. The proteins in the interstitial space attract water, and the lymphatic system is unable to absorb it. This “protein-rich swelling” is called lymphedema. 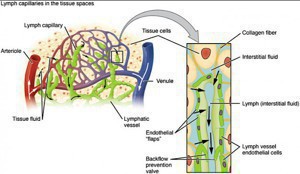 Methods used to control edema are not effective for lymphedema because they do not address the protein component of the swelling. Diuretics are commonly prescribed for swelling, which act to drain water from the interstitial space but have no effect on the interstitial protein content. The proteins re-stimulate edema formation once the water is gone and thus the problem remains. This is where manual lymph drainage enters the picture. By manually stimulating the lymph collectors and nodes, the anchoring filaments are stretched and the proteins are able to travel through the endothelial lining of the lymph capillaries and enter the lymphatic system so they can be eliminated from the body. A single treatment of MLD is not a cure for lymphedema, but regular treatments are able to control swelling and drastically improve the quality of life of patients.

Though it has been used for several decades, there is a lack of direct evidence of the efficaciousness of a single MLD treatment and its effect on lymph vessel contractile function. Typically, progress with MLD is seen indirectly by reduction in limb volume and circumference. These results occur over time, thus allowing the disease to progress in the meantime. One way to quantify the effects of MLD treatment is through a specific imaging technique called near-infrared fluorescence imaging, which allows researchers to observe the active contractile function and structure of the lymphatic system. In 2010, an exploratory pilot study was done by I-Chih Tan of the Baylor College of Medicine that assessed the efficacy of MLD by performing near-infrared fluorescence imaging before and after MLD treatment. Participants in the study were 10 subjects with unilateral grade I or II lymphedema (LE) and 12 healthy control subjects. The lymph velocity and propulsion frequency were assessed before and after a single session of MLD. The lymph velocity increased in the symptomatic limb by 23% and asymptomatic limb by 25% in those subjects with LE. Velocity increased by 28% in the control limbs of healthy subjects. The time between lymphatic propulsion events decreased by 9% in symptomatic limbs and 20% in asymptomatic limbs in the LE subjects, and by 23% in the control limbs. In all cases, MLD was proven effective.

The control limbs experienced a greater quantifiable benefit from the MLD than the symptomatic limbs. This could be due to the damage to the lymphatic system in those subjects with LE, causing a disorganized lymphatic network. Lymph vessel contractility reduces over time with LE, which could explain why the frequency of lymph propulsion in the affected limbs did not improve as much as in the control limbs. Nevertheless, this study supports implications that there are significant and immediate effects to a single treatment of MLD.