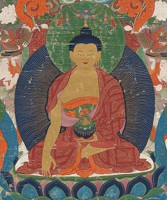 There are numerous meditation and mindfulness based techniques and approaches.  Some are more tied to certain religious/spiritual traditions such as Vipassana, TM, and Metta Meditation, others are from modern therapeutic approaches such as the many variations of mindfulness techniques and aspects of cognitive behavioral therapy.

On a basic level, techniques can be categorized by active (visualization, body scanning, etc.) and passive (zazen, etc.).  Then, of course, some are a mix of techniques or even a mix within a particular session.  Ultimately there is no right or wrong, only what works for a particular individual.  The benefits from countless studies are clear.

Visualization techniques, generally, can be very useful as they are ways to deepen the overall meditative experience and bring awareness to how you are influenced by your own thoughts/imagination and the physical world and experiences.  They can be difficult, however, as they require a certain amount of stability/focus in your mind.

In Tibetan Buddhist systems there is a strong use of visualization.  The techniques overall have layers of meanings, but at the base level it is about using all of our senses (via “imagination”) to deepen the meditation experience and, ultimately, your understanding of yourself and your feedback loops or, shorter, “reality”.  From any perspective, but here speaking of the Tibetan techniques specifically, visualization can be difficult.  For westerners in particular without deeper understandings of all the religious symbology within Tibetan Buddhism it can falter into a more disconnected experience than it may for those with deeper understandings of the language and symbols.

There are uses of the transformational power provided by visualization from the basic ones to changing our behavior and emotional states to deeper aspects of questioning the reality of our existence and surroundings.  Visualization can be very helpful to observe how certain thoughts/ideas/etc make us feel/react/think so that we can carry more awareness throughout our daily experiences.

Kalu Rinpoche (1905-1989) was one of the first Tibetan masters to provide training in the Tibetan spiritual traditions in the West.  Over time, and via other students and peers who also taught westerners, he become more aware of some of the challenges of teaching westerners.  There are many, but one was difficulties with the more advanced visualization techniques utilized by classical Tibetan methods - both in the sense of “ability” and in the deeper sense of understanding.

Rinpoche provided a “beginners” technique entitled “The Special Vajrayana Secret Mantra Shamatha” - which provides a basic approach to learning visualization stability and meaning.  The basics of the technique I am sharing below.  I often shared this technique with many of my Tai Chi students (whom I would also recommend to do the tai chi form via visualization in their meditation sessions).  My students also found these techniques useful for strengthening the stability of their meditation sessions.

As an aside, to most people, I generally recommend just pure and simple meditation, such as those described in my “Simple Meditation Techniques” article.  However, in specific circumstances, such as those learning Tibetan techniques, those wanting to deepen certain mindfulness/positivity practices, and/or in those with a more visual thinking/spatial learning style, visualization oriented meditation techniques should be considered.

A condensed version of the “Secret Mantra Shamatha” meditation practice is listed below.  It is based on a consideration of the five elements (earth, air, fire, water, and space from the Tibetan view) and associating these elements with colors to aid visualization.

Note - most visualizations described should be held for 5-10 minutes each, but beginners may start with less.  As with any meditation technique, when thoughts interrupt (they will…), simply regain composure and return to your visualization with no judgement or further discussion of the matter.

- Golden Square/Earth - Hold a visualization of a golden square, the nature of the element earth, with the general concept of all physical aspects of the world being contained within (including yourself).

- White Circle/Water - Then dissolve the golden square/earth into the concept of the water element, holding a visualization of a white circle.

- Red Triangle/Fire - Dissolve this white circle/water into the fire element, represented by a red triangle.

- Green Semicircle/Air - Dissolve the red triangle/fire element into the air element represented by a green half/semicircle.

- Blue Ball - Dissolve the green semicircle/air into the space element represented by a blue ball.

- Finally dissolve the air element/blue ball into a clear and colorless ball (like a crystal ball or water bubble) and then slowly allow that ball to grow larger and larger, eventually to “100 arm spans” - then have everything disappear and hold the idea of “nothingness” for a few more minutes.

The “elements” are ways of understanding/visualizing our external and internal “worlds”.  Internally, for example, food through digestion (fire), produces our flesh and bones (earth), blood and other fluids (water), the nostrils and other orifices (space) and breathing (air) - all constitute “us”.  Within the Buddhist symbology aspect each “element” represents one of the “five female buddhas” -  the earth element represents Buddhalochana (Sangye Chenma), the water element represents Mamaki, the fire element represents Pandaravasini (Gokarmo), the wind element represents Samayatara (Damtsik Drolma) and the space element represents Dhatvishvari (Yin Chukma).

The visualization, then, can convey the “feeling” of these meanings and relationships but the goal, initially at least, is to simply hold the visualization without internal commentary on any meaning.  The “dissolutions”, then, simply being a path leading to one less thing or aspect of yourself and existence to think about….  It is a relatively simple technique at face value, but with far deeper meanings within the Tibetan tradition.  However, regardless of the depth of understanding of the symbolism, this technique is likely to improve the stability of your meditation and ultimately your awareness of relationships and your action-reaction loops.