The TCM herb "bai tou weng" which in english is 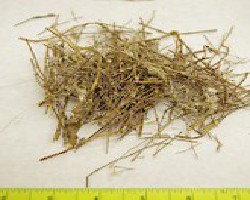 "chinese anemone root, pulsatilla", is categorized within the "herbs that clear heat and relieve toxicity" functional grouping. It is thought to enter the large intestine, liver and stomach channels and exhibits bitter (ku) and cold (han) taste/temperature properties.

A single herb is not often thought of as an empirical way to influence a TCM diagnostic pattern. Bai Tou Weng, however, is a strong candidate to be considered when needing to influence large intestine damp heat and/or spleen and stomach damp heat.

As noted above, bai tou weng is within the herbs that clear heat and relieve toxicity functional group. All the herbs in this category are listed below.

(truncated intro "... toxins for the purpose of this categorization means fevers and other adverse effects of infectious diseases where patients are clinically sick. )".