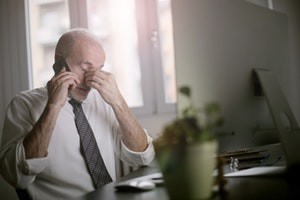 Through a variety of data samples it is estimated that approximately 30% of the global adult population experiences some aspect of insomnia on a frequent basis (1 ). Long term consequences of sleep issues have a broad array of affects. Some of these are related to reduced reaction time; automobile crashes, injuries - possibly leading to death. Others involve wellbeing and productivity; depression, low quality of life, family/relationship strains, poor work performance, etc. And finally others such as obesity, hypertension and dementia, etc., develop over longer periods of time (2 ,3 ). Considering the overall ramifications of poor sleep on our individual health and well-being as well as our societal constructs, it is rightfully considered an epidemic by many ( 4 - video ).

Chinese Medicine, both acupuncture and properly tailored Chinese Herbal Medicine, has a long history of successfully treating and resolving a range of sleep related disorders including insomnia as well as the concomitant psychiatric issues such as anxiety and/or depression or biome issues such as a range of digestive issues which are often behind it or interwoven with sleep problems.

Treatment, for nearly any condition, starts by performing proper Chinese Medicine diagnostic procedures such as utilizing tongue diagnosis, pulse diagnosis and a thorough health history to arrive at a systemic diagnosis in Chinese Medicine terms from which treatment is based (for general details on this process, read "treating the cause vs. the symptoms"). Our insomnia treatment section, for example, has a page on acupuncture for insomnia which has many of the more common underlying diagnoses in Chinese Medicine terms along with foundational points used to resolve these imbalances.

One of the somewhat common underlying patterns would be called qi stagnation, or liver qi stagnation, in TCM diagnostic terms. Now, as an aside, this pattern is not unique to insomnia alone. In fact, the actual conditions/symptoms that a patient presents with are almost irrelevant from a treatment point of view. Qi stagnation could involve insomnia, depression, shoulder pain, asthma, headaches, etc. It is more about what the underlying issues are, and treating that, rather than chasing after the symptomatic manifestations.

In a recent study, researchers from the Zhongshan Hospital of Traditional Chinese Medicine, among other institutions, performed a study evaluating the effectiveness of acupuncture combined with retained ear seeds (stick on seeds/balls that can be pressed by the patient repeatedly to stimulate the point) vs. xanax in both the short-term and the longer-term. They recruited 60 patients with a western diagnosis of primary insomnia and a Chinese Medicine diagnosis of qi stagnation (purple tongue, wiry pulse, etc.). The patients were divided into a western medicine treatment group (xanax) and an acupuncture treatment group. The western medications were used once daily and the acupuncture treatment group utilized the following protocol:

Treatment in both groups entailed 3 sessions of 10 days each. Sleep quality was quantified by using the Pittsburgh Sleep Quality Index (PSQI) and other factors were quantified by the self-rating depression scale (SDS) and looking for improvements in qi stagnation markers from a TCM perspective. The researchers found that in the short-term both groups noticed some improvement in symptoms - overall 86.7% in the xanax group and 96.7% in the acupuncture group. But at a one month follow-up with no treatment the acupuncture group still had 83.3% showing improvement, whereas the xanax group with no treatment had gone down to 53.3%. They concluded that "shallow acupuncture combined with ear-acupoint pellet-pressing can significantly improve sleep quality, depression symptoms, and pathological constitution in primary insomnia patients with qi-stagnation constitution, possessing a stable long-term clinical effect."

As is often the case, while medicines can be effective, for truly resolving the underlying issues leading to a persons problems something much deeper has to be done. As acupuncture only has an effect by guiding the body to function in certain ways, this effect tends to be more permanent - it simply becomes a new "norm" for the body. This is a critical difference between the approaches of Chinese and western medicine, particularly in our day and age of pharmaceutical influences. This study serves to illustrate this comparison fairly well.