Chinese herbal medicine is a complicated system with generations upon generations of thought, research and clinical use behind it.  For the most part Chinese herbal medicine is prescribed in formulas that are comprised of individual herbs.  These formulas, which are often hundreds if not thousands of years old, can often be personalized to your needs by adding individual ingredients.  Traditionally most formulas were given as teas comprised of the raw herbs, but for convenience and distribution benefits they are often used in pill or granule (ground/powdered) forms.

Chinese herbal formulas are primarily chosen based on your personal diagnosis in Chinese Medicine terms - not by your western symptoms/conditions.  For more on this, please read ("Treating The Cause And Not The Symptoms" and "How To Choose An Herbal Formula"). 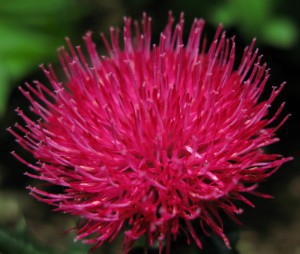 There are a number of individual herbs that can, and often are, used entirely alone and Da Ji (Cirsium, Japanese Thistle) is one of these.  The herb is primarily used for cooling the blood, stopping bleeding, dispersing blood stasis and reducing swelling in Chinese Medicine terms.  Having potential usefulness with such conditions as heavy menstrual bleeding, uterine bleeding, hematuria, upper GI bleeding, among others.

This particular herb, however, has some other indications that go beyond what the properties may indicate.  One of these is hypertension, particularly of the type from liver fire or related patterns in Chinese Medicine terms.

The function that I am going to discuss today, however, has potential implications for diabetes, pancreatic cancer and other pancreatic issues.  Recently researchers from a variety of Korean institutions including Sungkyunkwan University's School of Pharmacy, Chung-Ang University's Plant Science Department and the College of Korean Medicine at Gachon University conducted a study looking at the effects of Da Ji (Cirsium) on pancreatic beta cells.

They began the research in their own words because "despite the various health benefits of Korean thistle their effects on pancreatic β-cell apoptosis in type 1 diabetes mellitus and the underlying mechanisms remain unclear".  In other words, we know much about the beneficial functions of da ji but not enough about the mechanisms with particular relation to the pancreas.

The researchers concluded that:

"This study demonstrates the therapeutic potential and action mechanism of cirsimaritin for the prevention and treatment of type 1 diabetes mellitus."

It is always interesting to break down the functions of each individual herb within Chinese Herbal Medicine.  One could spend a lifetime (in fact many) doing so.  Thankfully for us as practitioners, many already have.  Da Ji obviously is worthy of more exploration, particularly as conditions such as diabetes (both type I and type II) have such great costs to each individual and our medical systems.  To that end, other studies utilizing cirsium have shown similar outcomes.