How Acupuncture Helps With Chemo Induced Nausea and Vomiting (Study)

How Acupuncture Helps With Chemo Induced Nausea and Vomiting (Study)

The beneficial effects of acupuncture on improving outcomes during western chemo cancer treatments have been well established in both clinical outcomes and in research studies. The reductions in nausea and/or vomiting from chemo are very beneficial not just from an obvious viewpoint, but many times proper treatment will allow the patient to continue taking western treatments where otherwise they would become too weak to do so.

While practitioners and researchers can accept the clinical outcomes as evidence of the benefits of acupuncture for chemo, it is still nice to know how in more exact terms that it is helping. Many of the studies that help illustrate how acupuncture works are done on animal models as it is easier to see deeper effects than in human populations. While animal studies have their own downsides, they do have some value in helping us to explore the "how" of acupuncture.

We know that many of the effects of acupuncture are modulated by the brain first and foremost and then very physical/chemical/hormonal changes happen - some points will make the similar change every time (i.e. lower stomach acid or release markers that tell certain muscle groups to relax); but other points are more modulating depending on the needs of the individual (for example, raise testosterone in someone with low testosterone and lower it in someone with high testosterone).

The study I am writing about today explored the effects of electroacupuncture for chemo induced nausea. The study utilized an animal model where they were given the cancer drug cisplatin which may be used in ovarian cancer, testicular cancer, bladder cancer, and others where appropriate. Among other more common side effects such as joint pain, tinnitus, and lower body edema, cisplatin commonly induces moderate to severe nausea and/or vomiting.

Publishing in the "Acupuncture in Medicine" journal, researchers from the Beijing Hospital of Traditional Chinese Medicine utilized 48 rats to conduct a 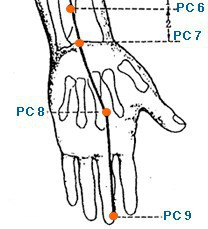 PC 6 and 12 were given sham acupuncture. Treatment was offered 3 days before cisplatin and 1-2 days after cisplatin - with multiple rounds.

Without treatment the researchers observed reduced food intake and increased kaolin intake (eating clay - a common response in animals when they are nauseous, "pica response"). They found that the CV 12 treatment group has "significantly reversed" kaolin intak

e (on days 1 and 2 following treatment) and increase eating and bodyweight (on day 1).

The researchers also found that acupuncture treatment at CV 12 reduced the normally increased 5-HT level (serotonin signalling - ~95% is in the gut) in the duodenum (commonly increased with cisplatin and a known marker for gastrointestinal motility). When 5-HT is increased there may be gastrointestinal upset, when it is lower there can be constipation.

They also found that CV 12 suppressed c-Fos expression (an oncogene, which is normally raised with the existence of many types of cancer). Treatment at PC 6 also appeared to influence c-Fos expression and kaolin intake, but didn't seem to have similar effects with increasing food intake, improving body weight or modifying 5-HT expression.

The researchers concluded that there are clear beneficial effects of electroacupuncture at certain points for chemotherapy induced nausea and vomiting. They postulate that this effect, particularly at CV 12, is from inhibiting the secretion of 5-HT in the duodenum and the suppression of the expression of c-Fos.

As an aside this effect on the altered mucosal serotonin (5-HT) signalling would in theory provide beneficial effects for a range of digestive issues as well (as we know from the clinical uses of CV 12). These would include irritable bowel syndrome (IBS) and Crohn's disease among others.

Now as with most studies, particularly those that look at the low-level operations of acupuncture, the actual clinical applications would not be to simply apply electroacupuncture at CV 12 for someone undergoing chemo and leave it at that. There are a multitude of points and appropriate protocols (many of which utilize CV 12) that would be far more helpful than a single point treatment. These general concepts are explored in two articles - "What Does Acupuncture Treat?" which explores treating the causes rather than following symptoms and "General Point Selection Rules" which explores in basic terms how to design a treatment protocol. Nonetheless, these types of studies are extremely valuable to illustrate the underlying mechanisms within which acupuncture offers clinical benefits.