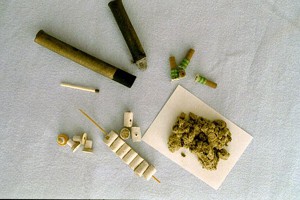 Primary dysmenorrhea, pain associated with menstruation, affects many women during their reproductive years.  Prevalence estimates range from around 40% to upwards of 90%, so it can be easily stated as common.  For around 10-20% of women the menstrual pain can be debilitating for several days or longer each month.

Acupuncture and Chinese herbal medicine have long been used for a range of women’s health issues, with dysmenorrhea being a commonly treated issue.  For many, a few months of treatment can lead to permanent improvements in the severity of symptoms, while some may require some basis of ongoing interventions.  Aside from ranges in treatment frequency requirements and longevity of responses, dysmenorrhea and associated issues generally respond well.

Access to proper Chinese Medicine care, however, is limited in many parts of the world.  Accordingly, anything that can be done as a form of self-treatment is worth evaluating.  Within Chinese Medicine there are a few options for self-treatment that come with generally minimal risks.  One of these would be acupressure, where the use of points such as SP 6, LV 3, and LI 4, as examples, may help alleviate menstrual pain.

Besides acupressure, a lesser known option is “moxibustion” or “moxa”  (see “What is Moxibustion?" for a general introduction).  Moxibustion may be done on many points for many reasons, but it is generally thought of as warming and mildly stimulating, used to both give energy and/or to relieve pain and reduce circulatory stagnation.  Some uses really need careful diagnosis and precise treatment point selections to avoid making certain underlying conditions worse - notably those involving yin deficiency and/or phlegm in Chinese Medicine terms.

Generally speaking, for dysmenorrhea, many of the areas in the lower abdomen may be appropriate for moxibustion.  Today, however, I am discussing a meta-analysis study involving “naval therapy” at the acupuncture point CV 8.

Conception Vessel 8, or “Spirit Gate” in English, is one of the rare “acupuncture” points that is never needled.  CV 8 is in the center of your umbilicus and is generally used only with moxibustion and most often in cases of serious weakness.  It is also used in dysmenorrhea cases either on its own or in conjunction with other points.

To illustrate the value of this technique with dysmenorrhea, a basic protocol using warming needle (acupuncture needles with moxibustion on the ends of the needle) at CV 4 and SP 6 found improved results by adding moxibustion at CV 8 (source).

From an application standpoint there are two common ways of using moxibustion at CV 8.  One is cone Moxa, which is applied by filling the belly button with salt and then burning the moxibustion cones on top of the salt.  The salt is used largely because the umbilicus has limited sensation and this avoids burning the area.  Another application, which is arguably more accessible, is the use of a moxa stick.  This can be lit and held a few inches away from the area and moved - the benefit of the stick approach is that it is easier to apply (for self-treatment particularly) and can be moved around to other points/areas more easily.

In a pure clinical situation, a combination of approaches would likely be used.  The practitioner would choose among acupuncture, Chinese herbal medicine, and/or moxibustion as appropriate.  But for a relatively accessible self-treatment option, just using this single point has merit.  The meta-analysis that prompted this discussion used data from 24 trials that involved over 2500 participants.  The researchers concluded that “compared with western medicine, navel therapy had a superior effect on pain intensity … on symptom resolution rate at 3-month follow-ups … and on global menstrual symptoms”.  Besides the potential for mild burns (rare if proper attention is used) there are essentially no side effects from moxibustion, particularly at the level that can be applied with self-treatment.

All things considered, while moxa may not be universally available, if something this simple can not only help symptoms at the time, but in cases, resolve the underlying imbalances removing the need for future interventions - all at a fractional costs with essentially no risk, it should be shared more broadly.

Along this line of thought, another relatively simple and often effective example of moxibustion and women’s health is the use of moxibustion at UB 67 to resolve breech presentation.  A study, of many, involving this technique may be read here.

While Chinese Medicine generally requires extensive training and experience to be properly applied and thus effective, there are a host of potential applications that can relatively safely and more importantly inexpensively and easily be applied to resolve a range of issues, some that can be quite expensive and/or difficult to handle with western approaches.