What is Moxibustion...? and other techniques "acupuncturists" use

What is Moxibustion...? and other techniques "acupuncturists" use

This article is the second in a series discussing techniques that "acupuncturists" use that do not involve needles.  As we discussed in the previous article about cupping, acupuncturists utilize more techniques than needling.  The varying techniques are important to be aware of, one so you are not caught off guard when your practitioner does something other than insert a needle, and two, so the public better understands the full scope of practice for acupuncturists (i.e. Doctors of Chinese Medicine).

Moxibustion is the use of the herb "Mugwort" (Ai Ye in Chinese, Artemisia vulgaris in Latin) for healing purposes.  Moxibustion (or, simply Moxa), can be used as a self-help remedy for a variety of conditions and is used within the clinics of many acupuncturists as well.

Generally speaking, moxa is used for conditions under the cold and/or stagnant principles in Chinese Medicine.  For the public this simply means deficient/weak and/or painful issues.  Some examples of deficiency conditions where moxa is helpful are general immune system strengthening (people who get sick often), chronic low energy, chronic fatique, cold hands/feet, etc.  Some painful conditions where moxa is helpful are menstrual cramps, arthritis, muscle pain anywhere in the body, and more.  There is one other common usage that people are often surprised to hear about and that is its use in the turning of a breeched baby.  The acupuncture point, UB 67, when used with moxa will correct a breech presentation over two-thirds of the time with no other interventions.

How Can I Use It As A Home Remedy?

Moxa is available in cigar shaped sticks where you light one end and place it about an inch or so away from a particular acupuncture point.  You want the area to get warm but not too hot, so you can alter the distance based on your comfort level.  Generally you would use the technique on both sides of the body for approximately 1-2 minutes per point.

The most common point for general vitality, immune system benefits, and increasing circulation is the acupuncture point Stomach 36 (ST 36).  (My acupressure article has a guide to finding common points).

Another common point for energy as well as menstrual cramps is Conception Vessel 6 (CV 6).  For menstrual cramps you would use this point along with generally warming the abdominal area where you feel the most discomfort.

Moxibustion is not just simply a warming of the body; the herb has stronger effects on the circulation of blood and on the immune system that can be measured in clinical studies.  Ancient Chinese medical texts have many stanzas touting moxibustions effect on longevity and vitality and many practitioners utilize it as well for general health maintenance.

How Do Acupuncturists Use Moxibustion?

Acupuncturists may use moxa just as you might with the moxa roll held either over points or near the needles after they are inserted into the body.  They also use moxa in the loose form (i.e. not in a roll) in 2 basic ways - indirect and direct.  Practitioners may roll the moxa into balls of varying sizes and place them on the head of the needles that are inserted into various points.  This lightly warms the needles and directs the properties of the herb into the acupuncture point.  This technique and the roll are examples of indirect moxibustion. 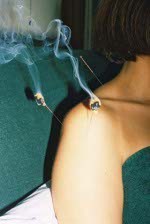 The other form of moxibustion used by acupuncturists is direct moxibustion where you use the loose form of moxa again but form it, most commonly, into cones or small threads and burn it while it is placed on the skin.  This technique generally creates more heat and may be better for "cold" conditions than indirect methods.  For the most part, however, the form of moxibustion an acupuncturist will use depends on their training and on the patients condition.

Are there any contraindications with moxibustion?

Yes, but your acupuncturist will know when it is appropriate to use it on you.  If you are using, or considering using, moxibustion at home you want to ask your practitioner first if it is ok.  Generally, moxibustion is appropriate on the majority of points so long as you have cold, weak, and or stagnant imbalances.  If you have lots of heat in your system or the environment is warm you may want to avoid using it.