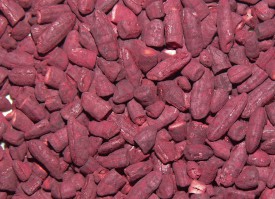 Red yeast rice, known as "hong qu" in Chinese Medicine, is a very commonly used herb to aid in lowering cholesterol levels. Besides cholesterol levels, studies on hong qu are seeing a range of positive effects on inflammation/autoimmune activity, diabetes, and other related conditions.

Red yeast rice is created by fermenting various strains of the yeast Monascus purpureus on rice. Studies such as this one have found a number of active chemistry, one of which is monacolin K (which is the exact same ingredient in the prescription medicine lovastatin).

While a number of the health benefits have been studied fairly extensively, a team of researchers from Taipei Medical University and the department of surgery at the University of Illinois sorted through a vast health records database to evaluate the effect of red yeast rice consumption and the risk of developing diabetes. They were specifically looking at rates of diabetes in people who used lovastatin or red yeast rice.

In their study entitled "Evaluating Risk of Incident Diabetes Between Patients Who Used Lovastatin and Red Yeast Rice Prescriptions (LipoCol Forte): A Retrospective Cohort Study Based on a Real-World Database" they combed through the health records of 34,504 people aged 20 years or older who had used red yeast rice at any point between 2010 and 2014. Another group combed through the same number of people who had used lovastatin during that same time frame and they were then matched by age and sex. All patients had no incidence of diabetes before these medications were used.

The researchers found that people who used red yeast rice appear to have a lower risk of developing diabetes than those taking the prescription medicine lovastatin. While they could not speculate why, partially from a TCM perspective and partially from a common sense perspective, items in their natural formats and certainly in this case red yeast rice, have a broader range of nutrients than a synthesized medicine. This isn't by default always beneficial, but generally speaking many of the mechanisms of herbal medicine are not well understood, but the clinical results are there nonetheless (and most often with less or no side effects). In part this is due to the vast range of active substances found in each herb, which gets even more complicated when researching formulas. Further, in herbal formulations the combinations of herbs are there to enhance certain functions, protect from creating other imbalances, etc. - medicines rarely have this in their design.

From a TCM perspective, red yeast rice is thought to enhance metabolic function, strengthening an imbalance we would generally call "spleen qi deficiency". It is also thought to resolve what we term blood stasis in tcm terms (some general concepts of what is meant by the "blood" in TCM can be found here). This somewhat speaks to the cardiovascular effects but together it speaks to the enhancing the bodies ability to both assimilate nutrition properly from food and convert it into what the body needs and then reducing inflammation to allow these items to get to where they are needed by the body.

All things considered there is a tremendous overlap between fatty liver, cholesterol, diabetes, inflammation and other common issues and anything that helps us to address this all too common composite of issues should be looked at very closely. And in fact it has been within Chinese Medicine for a very long time, perhaps not in terms that we can look at things now, but looked at, respected and utilized with great benefit nonetheless.