The TCM herb "hong qu" which in english is 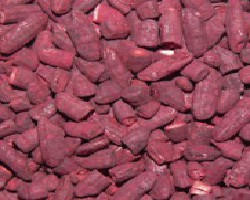 "red yeast rice", is categorized within the "herbs that invigorate blood" functional grouping. It is thought to enter the large intestine, liver and spleen channels and exhibits acrid, sweet (gan) and warm (wen) taste/temperature properties.

A single herb is not often thought of as an empirical way to influence a TCM diagnostic pattern. Hong Qu, however, is a strong candidate to be considered when needing to influence blood stagnation and/or spleen qi deficiency.

Hong Qu may potentially be used, in coordination with a well tailored formula (in most cases), to influence the following conditions: cardiovascular issues, cholesterol, diabetes type ii and/or hyperlipidemia

As noted above, hong qu is within the herbs that invigorate blood functional group. All the herbs in this category are listed below.