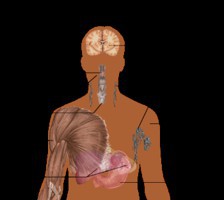 Traditional Chinese Medicine (TCM) includes acupuncture, Chinese herbal medicine and a host of other techniques. The majority of TCM has numerous studies and thousands of years of clinical information showing positive effects on immunity and inflammation among many other issues. HIV/AIDS is by any standard an extremely complicated condition and proper treatment is absolutely critical. This is in part for the longevity and wellness of the patient but to also reduce the spread of the virus.

What is presented within this article is a series of case studies of poor Chinese villagers with HIV who chose to participate in a TCM only treatment study. By all accounts modern western therapy for much of the world is either difficult to access and/or afford or the side effects are unmanageable with their level of available care making any or complete use of western drugs unfeasible. While the results presented by these practitioners are clinically interesting, much more research would have to be done to understand more defined and reliable Chinese herbal medicine approaches. 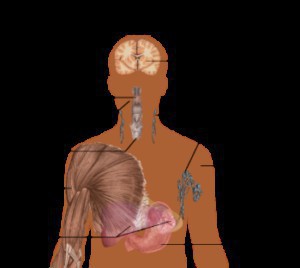 TCM has long been used to limit or balance the side effects of many strong western medications and there has always been a place for the combination of the two approaches (at least from the Chinese Medicine side of that equation). Within the world of HIV/AIDS care TCM has played an important role as well around the world. In the US one of the first TCM related public health services for HIV+ patients was the AIDS Care Project in Boston. The AIDS care project (1989-2014) provided biweekly acupuncture treatments along with herbal medicine care by donation via government public health funding. The work of that project is still carried on in satellite clinics and via individual acupuncturists. There are a number of others projects around the country that follow this model as well as projects such as the global acupuncture project who provides training and treatment to communities at need around the world.

While much TCM related research and effective clinical work has been done to alleviate side effects of both AIDS and western medications, not as much has been done to show treatment without western medications. A team of researchers from the Institute of Biomedicine at Jinan University in Guangzhou China and the Public Health Preparedness for Infectious Disease Program at The Ohio State University in Columbus Ohio set out to explore the TCM only/TCM primarily approach.

Publishing in the AIDS research and human retroviruses journal the researchers explored case studies of 9 rural Chinese patients with AIDS. The patients ranging in age from 51 to 67 were from an "AIDS village" in Anhui Province and had contracted HIV around 1994 through the donation of plasma. While there were over 40 patients in the village at the time, only 9 were confident enough in TCM to participate in the study. The patients were treated either with TCM alone for a 9 year span or TCM alone for a 5 year span followed by occasional antiretroviral therapy. The TCM treatment included a formula comprised of 13 herbs including Ren Shen (ginseng) and Huang Qi (astragalus), both of which have effects on digestion/immunity/weakness of the body and Huang Qin (skullcap), which clears heat in the digestive tract and elsewhere.

As a clinical sidenote herbal therapy would ideally be tailored to each individual. While there a host of tonifying herbs that are critical to provide aid to the bodies immune system, treatment would be balanced with others that clear heat, aid digestion, aid the liver, harmonize the digestive tract, and/or clear pathogenic influences. 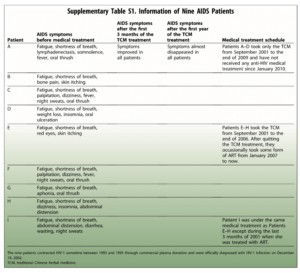 The researchers found that in 2016 eight of the nine followed patients had undetectable viral loads and the ninth had a very low viral load and they were all in good health overall. Through various diagnostic mechanisms the researchers were able to confirm that these 9 patients were not anomalies such as "long-term non-progressors" or "viremic controllers" - that is they were not by all clinical accounts from the group of people that seem to be HIV+ but display little or none of the clinical symptoms (by some accounts this is between 1% and 5% of all HIV+ patients).

According to the researchers these case studies show that TCM has the potential to "become a functional cure for HIV/AIDS".

Being far more cost effective than western medications and very likely far less damaging over the long-term, more research towards the TCM only approach is warranted.