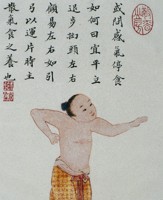 In recent years modern western medicine has found more and more relationships between our digestive systems and our mental health.  While it was understood long before we could explain it in biochemical terms, Chinese Medicine has long known that these relationships exist and treated these conditions accordingly.  The herbal formula, Yue Ju Wan, also known as the "escape restraint pill" or the "cyperus and atractylodes formula" is one of the chief formulas which represent this brain-gut relationship.

The formula was first textually described in 1481 CE.  It falls under the "promote the movement of qi" category within the functional groupings of Chinese Medicinal formulas.  In basic terms this means that it helps to resolve "qi stagnation" which is essentially "stuck" energy.  In practical clinical terms this formula is used to treat a wide range of digestive issues including gallbladder issues, abdominal pain, reflux, and more when the underlying issue is that of stagnation, not deficiency (in which case other formulas are far more appropriate).

Effectively due to this biochemical and functional overlap between our gut and our brain this formula (and others in its class) may also be used for a range of psychiatric issues including depression, panic disorder, schizophrenia, etc. - again when the underlying causal factor is stagnation.

In the study that I'm going to discuss today researchers from the Key Laboratory of Integrative Biomedicine for Brain Diseases within Nanjing University of Chinese Medicine set out to review the clinical use of Yue Ju Wan as well as one of the chief ingredients, Zhi Zi (Jasmine Fruit), for the treatment of a range of mood-related syndromes, particularly depression.

After looking over a range of published animal studies and clinical observations the authors of the current meta-analysis concluded that "yueju confers rapid antidepressant effects" ... and "Yue Ju Wan may have great clinical applicability".

Now in the modern clinical realm there are, in fact, many formulas which have shown a positive effect on depression and other psychiatric conditions.  Part of the true value of Chinese Medicine is in the diagnostic framework which tailors treatment to the individual - not to the condition (see "treating the cause vs. the symptoms").  While these types of studies are very useful, at the end of the day what matters most is arriving at the proper diagnosis of the underlying factors to obtain proper treatment.  If your patients have depression or other psychological issues that arise from "stagnation" in Chinese Medicine terms, however, Yue Ju Wan may very well be a good clinical option.