The TCM herb "chuan bei mu" which in english is 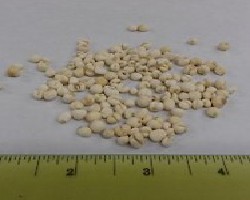 "fritillaria bulb", is categorized within the "herbs that cool and transform phlegm heat" functional grouping. It is thought to enter the heart and lung channels and exhibits bitter (ku), cold (han) and sweet (gan) taste/temperature properties.

Our clinical staff have made the following notes, regarding chuan bei mu:

Chuan Bei Mu may potentially be used, in coordination with a well tailored formula (in most cases), to influence the following conditions: cough and/or lung problems

While it may not always be included depending on the manufacturer or herbalist making the formula, chuan bei mu is generally included in the following 2 formulas:

General yin deficiency signs may present as night sweats, heat in the soles and palms, and flusing. Cough/wheezing, possible blood in the sputum, dry and sore throat may present from lung yin and qi…

Most often used for childhood convulsions (possibly with wheezing, nausea, nighttime crying, vomiting, diarrhea, excessive mucus/saliva) or other conditions that involve fever, impaired or loss of …

As noted above, chuan bei mu is within the herbs that cool and transform phlegm heat functional group. All the herbs in this category are listed below.