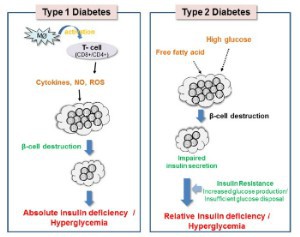 Diabetes is a global health epidemic that has many underlying factors, with diet being a critical part of the equation. Currently, over 100 million people in the US are reported to be living with diabetes or pre-diabetes and that number appears to be growing. For type II diabetics, in many cases, their issues arise from a process that is many, many years in the making. In many of these people the pre-diabetic markers, and "insulin resistance" activity is in place for 5-10 years at least before they develop type II diabetes. They often don't know, because they don't check their sugar except for through the occasional fasting blood sugar test during a physical; which can often appear "ok". The positive note is that in the vast majority of cases this state is resolvable with appropriate attention to diet, exercise and appropriate medical guidance and care.

The entire process of the development of diabetes, type I or type II, is not completely understood, but the basics are that you need insulin to help your body convert food into energy. What are called beta cells are responsible for the production of insulin in the body - if they are destroyed and/or the channels to activate them are disrupted (i.e. "insulin resistance"), then your body can no longer create insulin and blood sugars will rise.

In type I diabetes the beta cells are damaged and your pancreas makes very little or no insulin. The underlying factors for the development of type I are likely autoimmune, genetic and/or environmental. In type II diabetes the body can create insulin, but it either doesn't produce enough and/or the process doesn't work well. This is more closely linked to diet and obesity, but there are other factors including environmental that may play a role.

Chinese Medicine, both acupuncture and herbal medicine, offers treatments for type I and type II diabetics. In some cases Chinese Medicine can be used exclusively and in others in combination with other western treatments. While there is -never- a fixed linear approach in Chinese Medicine for any condition, particularly ones as technically complex as diabetes, there are a range of well understood approaches that would be tailored to each individual (see "treating the cause vs. the symptoms" for more on that). Our diabetes type II treatment section has a range of underlying diagnoses in Chinese Medicine terms, basic acupuncture protocols, herbal formula options and more.

In this article I am going to discuss two studies (beta cells and insulin resistance) that look into the biochemical effects of a well known Chinese herbal formula, wu mei wan, on improving the factors underlying the process of diabetes. The researchers come from multiple institutions and departments including the Institute for Integrative Traditional Chinese and Western Medicine within Tongji Medical College, a top medical school in Wuhan China.

Wu Mei Wan, or the "mume fruit pill" is traditionally used for roundworms and, when appropriate, other parasitic infestations. In modern times that usage is still very common, but it also gets applied for more complex systemic conditions such as irritable bowel syndrome, crohn's, SIBO and diabetes. Now, again, you wouldn't give this formula to everyone that has any of these conditions, there is a whole host of diagnostic information that Chinese Medicine practitioners would use to determine if this is correct at all for you at this given time or if something else would be used first, or possibly a modified version of it or a complex combination would be more appropriate for you. But it is a widely used formula.

Clinically we have observed for centuries the beneficial effects on the conditions and patterns for which it is used. But scientific exploration of these formulas is increasing and is quite useful to understand in deeper biochemical terms what may be happening to lead to these beneficial effects - and that is what these researchers set out to do.

In their first study, published in 2017, they explored the mechanisms of the benefits for insulin resistance in a cellular model. While the model and the lab work was fairly technical, the researchers found that Wu Mei Wan "restored impaired insulin signaling" via the following mechanisms:

The researchers concluded that wu mei wan could reduce insulin resistance "via inhibition of NLRP3 inflammasome and reduction of proinflammatory cytokine production."

In their second study, published in 2019, they were looking specifically at using Wu Mei Wan to alleviate damaged pancreatic beta cells. This study showed that through similar mechanisms inhibiting the activation of the NLRP3 inflammasome, damage to the pancreatic β cells was prevented and the development of type II diabetes was hindered.

If your beta cells function, then your body is far more likely to be able to control blood sugars. What this formula and these studies allude to is that there are a host of inflammatory processes that are likely involved in the development of diabetes. This speaks volumes towards trying to move not just towards weight loss and exercise, but towards a diet that is less inflammatory generally. This means less red meat, less bad fats, less sugar, less refined carbohydrates, etc. and move towards more of a plant-based mediterranean style diet (a basic list of anti-inflammatory foods can be found in this article from harvard, along with a more detailed and sustainable diet plan here.). All of this, with the possible inclusion of appropriately selected Chinese Medicine herbal formulas, properly tailored acupuncture and other exercises such as tai chi for diabetes can be strong tools for stopping the development of, or reversing the processes of, diabetes.