The TCM herb "ou jie" which in english is 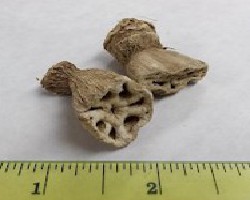 "lotus rhizome nodes", is categorized within the "herbs that stop bleeding" functional grouping. It is thought to enter the liver, lung and stomach channels and exhibits neutral (ping) and sweet (gan) taste/temperature properties.

As noted above, ou jie is within the herbs that stop bleeding functional group. All the herbs in this category are listed below.