There are literally volumes of studies regarding Tai Chi and the health benefits it offers.  So many, in fact, that it is somewhat tiring (but inspiring!) reading through them continually.  I've written previously on some of the basic health benefits of tai chi, and many other articles on health benefits related to depression and anxiety, diabetes and diabetic neuropathy, insomnia, systemic inflammation, fibromyalgia and many others.  Why another report then?

As a teacher of Tai Chi and a Chinese Medicine practitioner, I find that there is still too little the public (notably the western public) knows about this art.  The cost of entry in terms of commitment, so to speak, can be a little high.  So that can be a barrier for some - similar to the follow through required for dietary change and any other significant lifestyle change or new exercise program.

Some know it as a martial art, but doubt the effectiveness vs. other martial systems so they go a different direction.    Some know of the health benefits but don't understand how significant they are.  How study after study more significant benefits are found and are far stronger (and safer - even rebuilding after a heart attack) than other types of exercise.

Without this knowledge your motivation might not be there to start going out in your yard and moving incredibly slowly in orchestrated moves much to the intrigue of your neighbors!

In all seriousness, however, we are at a bit of a health crisis and many of the benefits of Tai Chi appear to slow or outright halt many of the low level progressive health issues we face as westerners particularly.  So it's worth a good hard look at. 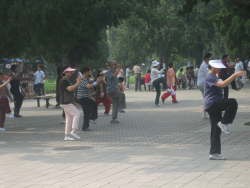 Traditionally, many, many practitioners of Tai Chi, some of whom who became great masters, started Tai Chi because they were in poor health.  Some were young, some were in their 50's, 70's, even 90's before they started.  They used it as a tool to regain the strength and resilience of their body and mind.  Some of the stories are actually pretty amazing.  This was all much before we had relatively intense western studies looking at the deep health benefits on a physiological level.  People just knew that Tai Chi was their best option to dig themselves out of the trouble they were having with their health.

Researchers at the Taizhou People's Hospital in China recently conducted a study looking at the benefits of Tai Chi with lung cancer patients who were undergoing chemo treatment.  Chemotherapy can be a deeply fatiguing endeavor for patients, and with lung cancer, it can be even more so.  To see if Tai Chi could help alleviate their fatigue, researchers recruited 96 patients over a couple years all of whom were having chemo treatments.  The intervention required one hour of practice every other day over a 12 week span and the control group was a low-impact exercise group.

Using the Multidimensional Fatigue Symptom Inventory Short Form (which has been well validated as a measure), the researchers evaluated each patient group before their first chemo treatment, before their 3rd course and again after their 4th course.

Researchers found that while both groups improved in mood and psychological well-being, the Tai Chi group experienced much better results in both physical and stamina/vigor measures.  The researchers concluded that

This study helps illustrate a couple aspects that are important to me.  The most important is that you do not need to have a special level of fitness to practice Tai Chi.  Secondly, the health aspects of Tai Chi appear to happen almost instantaneously upon beginning practice.  Now certainly over the long-term there are other benefits.  And the benefits for cancer patients (and other chronic illnesses) are likely much deeper than this study indicates when you place this study with others highlighting effects on immunity, on blood levels, on cardiovascular strength, etc.

All things considered, Tai Chi, deserves a much deeper more systemic look from the western medical world and the public in general.  While it is an old art in some ways, it seems it has much to offer us in modern times.