The TCM herb "fu zi" which in english is 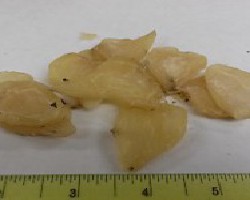 "prepared aconite root", is categorized within the "herbs that warm the interior and expel cold" functional grouping. It is thought to enter the heart, kidney and spleen channels and exhibits acrid and hot (re) taste/temperature properties.

Our clinical staff have made the following notes, regarding fu zi:

While it may not always be included depending on the manufacturer or herbalist making the formula, fu zi is generally included in the following 6 formulas:

Spleen yang deficiency resulting in coldness of the limbs and/or interior, borborygmus, and possible loose stools or diarrhea. Feeling full even with small amounts of food, bloating, epigastric/abdo…

Tonifies the kidney yang and astringe the jing (essence), primarily for sexual dysfunction in older males - symptoms may include impotence, erectile dysfunction, premature ejaculation, and other sign…

As noted above, fu zi is within the herbs that warm the interior and expel cold functional group. All the herbs in this category are listed below.