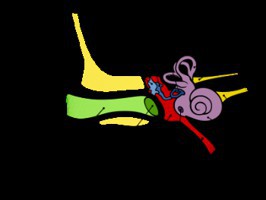 Tinnitus is the perception of ringing and/or sounds in the ear.  The severity can range from mildly annoying to disabling.  It affects over 340 million people worldwide and appears to be increasing for a not entirely clear set of reasons.  Military personnel, factory workers, and others with noise trauma experience the conditions at a much higher rate, which makes sense considering their exposures. While it can be associated with hearing loss, somewhere near 40% appear to have no hearing loss whatsoever with tinnitus, even in chronic cases.

Underlying tinnitus may be a range of issues besides direct noise trauma.  These other issues include anxiety disorders, cardiovascular issues, cervical disc issues, and many more options.  Proper treatment, then, particularly from a Chinese Medicine perspective involves dealing systemically with the condition - i.e. "treating the cause and on the symptoms".

Clearly appropriate treatment requires tailoring and taking the wrong approach will lead to very poor results if not outright side effects.  Within Chinese herbal medicine, for example, a common formula for kidney yin deficiency, zhi bai di huang wan, could technically be used for tinnitus in a patient with yin deficiency.  But that very same formula would have little or a poor effect on a person with liver fire where long dan xie gan wan would likely be quite helpful.

While at the same time making the point of tailoring, there is still much value in learning from others approaches even those from standardized studies which don't often take into account the persons diagnosis from a TCM perspective.  In the study I'm going to discuss today researchers from the Department of Anesthesiology, Department of Community Medicine, and others, within Guilan University of Medical Sciences in Rasht, Iran conducted a randomized clinical trial of acupuncture for tinnitus.

Offering 15 sessions of acupuncture and then doing a 3 week follow up researchers treated 26 males and 18 females and had a control group  of 27 males and 17 females who received sham acupuncture.  Treatments were offered 3 times/week for 5 weeks and they utilized the following points:

One quick note about the points listed above - you will see the issue "wind" referenced multiple times for those points.  Wind in TCM is a term talking about disruptive influences that may come internally or externally.  In the internal sense it can be generated from "heat" or excessive nervous system activity in the body - like a facial tic when you are stressed.  Or it may arise externally such as a headache from the common cold - what we might call wind-cold or wind-heat.

Those in the active treatment group within the study experienced significant improvements in both loudness and severity after the 15 acupuncture sessions.  The researchers concluded that:

As far as treatment approaches go there are many; so very few practitioners would likely use all of these points or just these points, instead tailoring to the individual.  Our general approach, for example, is found on our tam healing for tinnitus page.  We generally utilize some of the points within this study but have a few other approaches including more focus on the cervical involvement.

At the end of the day the only right approach is the one that is right for your specific mix of issues and that is the role of your practitioner to figure out.  What we learn from these studies, however, is that these conditions should respond and you get a  ballpark within which you should expect a response.  Permanent resolution in certain cases is possible and in other cases some level of management may be necessary, although in my clinical experience once you get a response it tends to hold fairly well without consistent intervention.

I would add to this that even those with mild cases should consider treatment.  This is due to the fact that tinnitus can be one of those many easy to overlook signs that indicate a much larger problem (i.e. cardiovascular disease, significant psychological issues, etc.) brewing.  While we as Chinese Medicine practitioners do not often get the opportunity to not be our patients last resort, much of the value in Chinese Medicine is resolving these early imbalances before there are large scale identifiable issues from a western perspective.