The TCM herb "shan yao" which in english is 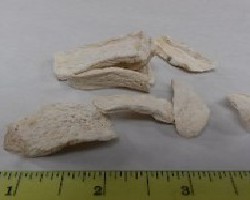 "chinese yam", is categorized within the "herbs that tonify qi" functional grouping. It is thought to enter the kidney, lung and spleen channels and exhibits neutral (ping) and sweet (gan) taste/temperature properties.

Shan Yao may potentially be used, in coordination with a well tailored formula (in most cases), to influence the following conditions: cough, diarrhea, fatigue, spermatorrhea and/or sweat problems

While it may not always be included depending on the manufacturer or herbalist making the formula, shan yao is generally included in the following 16 formulas:

Fatigue, weakness, with pale complexion due to chronic qi and blood deficiency. Hemiplegia, slurred speech or involuntary muscle control due to blockage of the channels and collaterals.

Brittle nails, yellowing of the skin (jaundice). Abdominal cramping, distension or pain in the hypochrondia due to liver qi stangation Fatty liver, hepatitis and other liver diseases.

Ringing in the ears/tinnitus. Unblocks the ears - useful for diminished hearing or temporary hearing loss. Red/dry eyes with blurry vision.

For stomach and spleen qi deficiency with dampness that has potentially generated mild interior-heat - diarrhea, abdominal pain, poor appetite, epigastric pain. May be used in early pregnancy for mo…

Frequent, clear and prolonged urination with difficulty restraining - along with other kidney deficiency signs. Bedwetting in children in many cases, not necessarily just from deficiency.

A very important formula to stop bleeding (generally from any cause) in Chinese Medicine.  Can be used topically and orally and comes in two primary formats (capsules and powder vials).  It is used i…

Tonifies the kidney yang and astringe the jing (essence), primarily for sexual dysfunction in older males - symptoms may include impotence, erectile dysfunction, premature ejaculation, and other sign…

As noted above, shan yao is within the herbs that tonify qi functional group. All the herbs in this category are listed below.