Approximately 1 out of every 15 Americans are likely to have sleep apnea.  This amounts to roughly 14 million Americans.  In western countries generally, rates are approximately 2% of women and 4% of men ( 1 ).  Other Asian countries do not have well researched statistics, although what is available looks similar to many of the western statistics.  Most importantly perhaps is that the highest relationships are found in older males that are overweight, have higher blood pressure, who snore, and who smoke.  So outside of some fringe cases with structural abnormalities, obstructive sleep apnea appears to be a lifestyle related condition. 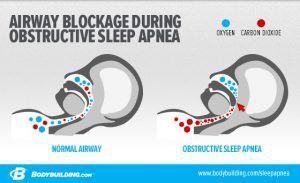 To that end, the mayo clinic, states that "self-care may be the most appropriate way for you to deal with obstructive sleep apnea ( 2 )".  They recommend the following tips (below with some commentary from the Chinese Medicine side):

While a mildly blocked airway that leads to snoring and interrupted sleep may not seem like a large issue, sleep apnea can be fatal and should be taken seriously.  Other symptoms or complications include:

Some of the issues above may be experienced by a partner who sleeps in the same bed from the disruptions to their sleep over time.

Chinese Medicine, both acupuncture and Chinese herbal medicine, are used regularly to treat sleep apnea and along with diet and/or lifestyle changes when appropriate can be very effective.  Proper treatment, however, must be tailored to the individual as there are many potential TCM diagnoses that can lead to sleep apnea in an individual (for more on this generally, see "What Does Acupuncture Treat?").

For obstructive sleep apnea (the most common version and what the study we are discussing today was exploring) a very likely underlying trait in common is a weak "spleen" in Chinese Medicine terms.

For general details about the spleen system in Chinese Medicine, see my article "My Spleen is What?".

The spleen system in Chinese Medicine has less to do with the physical spleen, rather quite a bit to do with our bodies functions that properly assimilate food and turn it into energy and distribute that to where it is needed.  Generally two things greatly weaken the spleen (diet and lifestyle) and, when weak, these imbalances mutually contribute to each other.  Further when the spleen is weakened, even the benefits of proper changes to diet and lifestyle can be slow to materialize because the internal functions themselves are weakened.  Like putting high quality oil and premium gas into a car with no wheels.

Without strengthening these underlying systems from a Chinese Medicine perspective change can be slow.  And while important, potentially even life saving, western treatments such as CPAP machines in part serve to aid people in avoiding the work that needs to be done to help their body function normally.

Part of what Chinese Medicine offers is the ability to both treat symptomatically and systematically which when done properly greatly increases the chances of your body being to function well without constant medical intervention.

The study I'm primarily discussing today comes from researchers at the Departments of Otolaryngology and Orthopedics at Tongji Medical College in China.  They performed a meta-analysis of clinical studies regarding acupuncture and obstructive sleep apnea.  After a thorough search they reviewed 6 randomized clinical trials which included 362 patients.

The researchers concluded stating that "both MA and EA were more effective in improving AHI and mean SaO2. In addition, MA could further improve apnea index and hypopnea index compared to control."

What other studies are there?

One 40 person study from the Department of Physiology at the Universidade Federal de Sao Paulo drew the conclusion that "A single session of either MA or EA 10 Hz had an acute effect in reducing the AHI as well as the number of nocturnal respiratory events of patients presenting with moderate OSA."

Another 30 person study from the Yueyang Hospital of Integrated Chinese Medicine and Western Medicine in China utilized GV 16, GV 15, GB 20 and an extra point on the neck "Shanglianquan".  They concluded that "acupuncture treatment has intervenient effect on OSAHS and alleviates anoxia, so acupuncture is one of therapies improving anoxia in patients of OSAHS".

Another 66 person study from the Department of Acupuncture and Massage at Guiyang College of TCM looked at the curative effects of acupuncture compared with CPAP and concluded that "The therapeutic effect in the nCPAP group was better than that in the acupuncture group during the treatment, but no significant difference of the therapeutic effect was found between the two groups at the end of treatment".  They continued indicated that acupuncture aids apnea through different mechanisms than the CPAP.  Reading into this, in one cause air is forcing your body open so to speak and in the other case (acupuncture) your body is opening - in laymens terms your body is doing the right thing.

How Do You Approach Sleep Apnea?

Of primary importance in treatment is first arriving at a diagnosis in Chinese Medicine terms - found generally with the methods listed under our  "Examinations and Diagnosis" section.  From this in our clinic we primarily use the Tam healing system from my master Tom Tam.  For sleep apnea we use the points indicated in our Tam healing for sleep apnea page.  They generally comprise points which accomodate for the multi-faceted possibilities leading to sleep apnea - obstructive or otherwise.  The main points we generally use are as follows:

All things considered for those who want to truly address sleep apnea, there is much that Chinese Medicine can offer to this end. As in most cases each patient will be best served if they are involved with their own healing process, but outside of what they can do on their own there are clearly benefits from acupuncture when properly applied.  Considering the potential complications of sleep apnea, it seems clear that the time to work towards resolution of these issues is now.