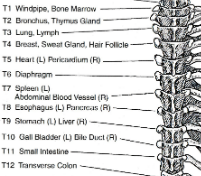 The acupuncture point "EX Huatuojiaji at T10" , 華佗夾脊, is represented by "Huatuojiaji" in pinyin and "Sides of Spine at T10" in english and may be found:

.5 cun lateral to the lower border of the spinous processes of T10

A single acupuncture point is not commonly thought of as an empirical way to influence a TCM diagnostic pattern. EXHuatuojiaji at T10, however, is a strong candidate to be incorporated into an acupuncture protocol for patients who exhibit: Liver and Gallbladder Damp Heat

EX Huatuojiaji at T10 may potentially be used, in coordination with a well designed acupuncture treatment protocol, to influence the following conditions: Chronic Cholecystitis, Gallstones (Cholelithiasis) and/or Hyperlipidemia

While not necessarily valid clinically, UB 19 (Shao Yang level diseases, alternating fever and c…) and UB 48 (Local Point.) are nearby.